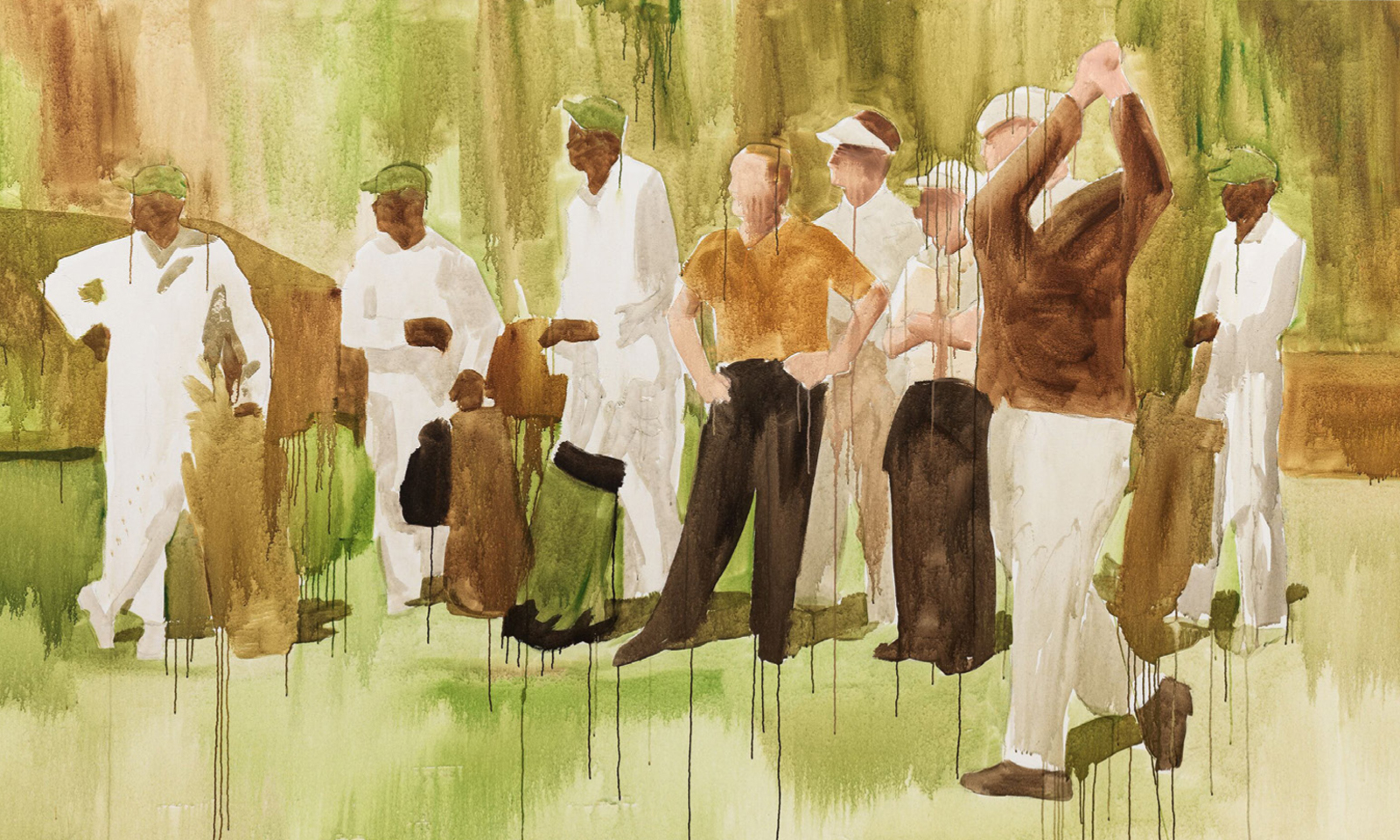 A new exhibition at Hauser & Wirth Southampton gallery presented rarely seen works from artist Henry Taylor, which narrates the history of Black caddies in a predominantly white and racially exclusionary sport. Titled “Henry Taylor. Disappeared, but a Tiger Showed Up, Later”, Taylor began the series in 2018, based on archival photography of country clubs dating back to the 1920s.

Taylor’s poignant paintings depict the Black caddies’ history and the professional golfers who navigated these predominantly white and racially exclusionary games. In discussing the series, Taylor shares, ‘I remember when there were a lot of Black caddies. My mom cleaned houses for a living and now the maids are Hispanic. Different people disappear. The caddies disappeared. That was enough reason for me to paint them.’ The Caddies series begins with a sepia-toned painting, recreating a photograph taken in 1936 at the Augusta National Golf Club in Georgia, home of the Masters Tournament. Since its inception, the white-only club practiced an unwritten rule requiring its players to employ local caddies, all of whom were Black. At the center of the painting is top golfer Gene Sarazen’s favorite caddie, nicknamed ‘Stovepipe’ because of the hat he frequently wore both on and off the course. His full name has been lost to history. Another highlight of the exhibition is a monumental painting based on a photograph of Arnold Palmer smoking alongside a group of caddies at the 1960 Masters Tournament in Augusta, Georgia. The caddies are dressed in the required club uniform: white boiler suit and green cap. In both works, the figures blend into their backgrounds, painted in subtle shades of muted earth tones, and in some cases echo the Black and white and sepia-toned photographs by which they were inspired.

Racial segregation in the club continued for decades. In 1977, Clifford Roberts, one of the club’s founders, infamously stated, ‘As long as I’m alive, golfers will be white, and caddies will be Black.’ But only five years later, in 1982, the club revoked the requirement to use local hires, allowing invited players to use their own caddies. This revision had an unintended consequence: while Roberts could no longer boast of the club’s institutional segregation, the representation of Black men in the game declined precipitously. Three paintings from the series celebrate two of the most important caddies who endured this shifting landscape: Herman Mitchell and Carl Jackson. Recreating one of golf’s most famous embraces, Taylor depicts the 1995 image of golfer Ben Crenshaw collapsing into his caddie Jackson’s arms after winning the Masters Tournament. Jackson was one of the longest-serving caddies, beginning his career in 1958 and caddying in every Masters tournament save one between 1961 and 2015. At 65, Jackson was asked once what advice he would give to a young Black man who expressed an interest in golf: ‘It would be my suggestion,’ he said, ‘to try to be the player.’

The final work in the exhibition is painted from a photograph of professional golfer Calvin Peete at the 1981 US Open. In 1980, Peete made his debut as only the second Black golfer ever to play in the Masters Tournament. He was once asked his opinion of the Masters’ caddie tradition: ‘Until Lee Elder, the first Black man to play the tournament, the only Blacks at the Masters were caddies or waiters… to ask a Black man what he feels about the traditions of the Masters is like asking him how he feels about his forefathers who were slaves.’

The exhibition ran from July 1st to August 1st. It included Taylor’s new sculptural assemblages made from domestic objects collected from swap meets and flea markets. When paired with the Caddies series, these works reveal Taylor’s voracious sourcing of subjects and materials, as well as his comprehensive command of historical knowledge. Referring to this highly intuitive process as ‘hunting and gathering,’ the artist is able to simultaneously merge multiple references – historic and contemporary – into sharp focus.

Henry Taylor Taylor has been the subject of numerous exhibitions in the United States and internationally. His work is in prominent public collections. Taylor lives and works in Los Angeles, CA.