As a member of the US Army during World War II, what got Charlie Sifford through the Battle of Okinawa were thoughts of pursuing a childhood dream – succeeding as a professional golfer.

The son of a factory worker, the energetic Sifford had caddied as a youngster at his whites-only hometown country club in Charlotte, N.C. where he’d earn 60 cents a day (giving 50 to his mother). By age 13, he sometimes broke par when caddies were allowed to play the course on Mondays. At age 17, Sifford was told that he could no longer practice golf at that club. He then moved to Philadelphia, which had a public golf course that was open to Black players. By his mid-20s, Charlie was a superb player. 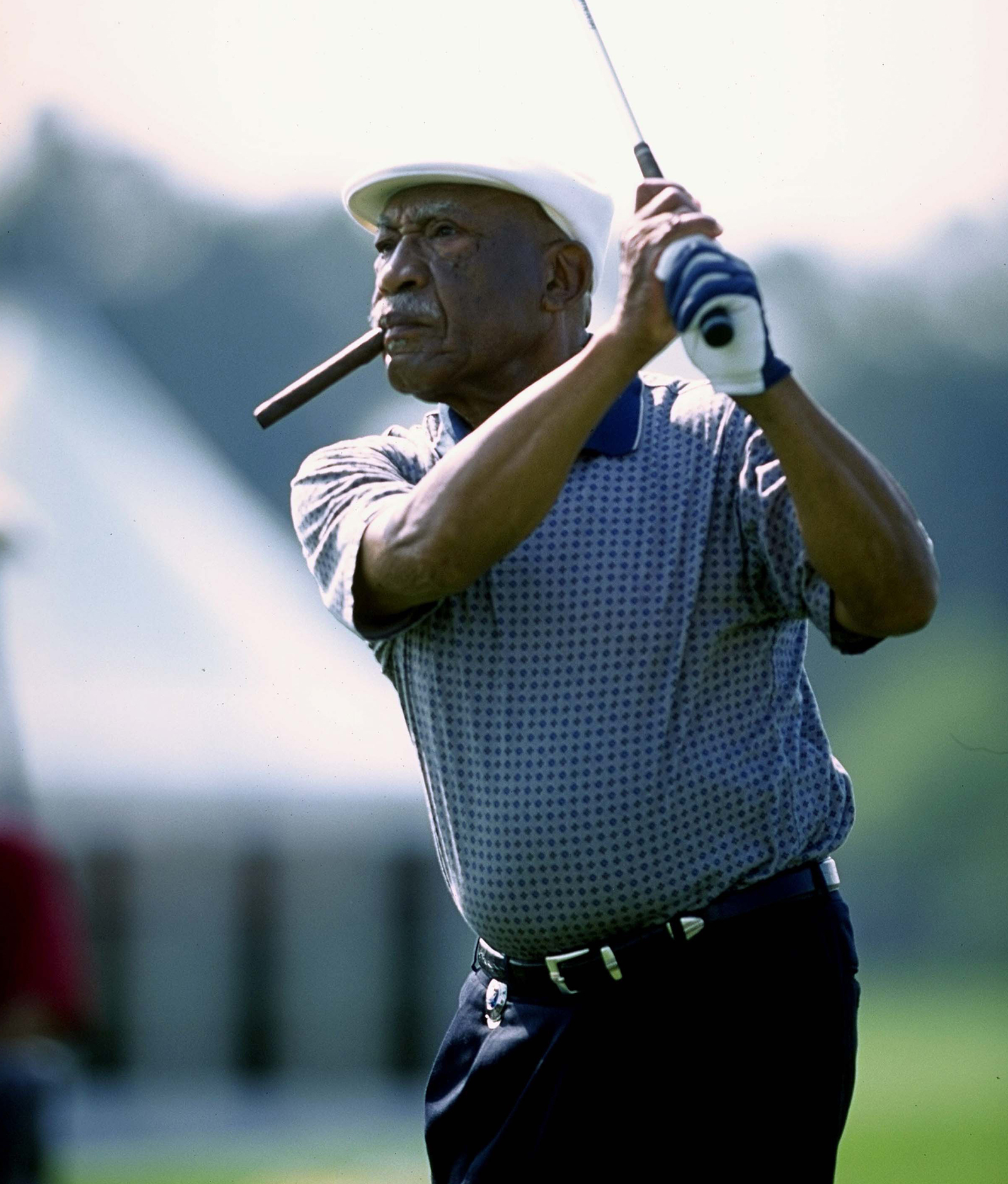 Returning from the war, young Sifford received some advice from another army veteran who had just broke the barrier in another sport where the ball and players were white – baseball’s Jackie Robinson.

“He asked me if I was a quitter,” Sifford recalled. “He said, ‘OK, if you’re not a quitter, in spite of the hostility he said I would encounter, to go ahead and take the challenge.”

As he pursued his ambition, Sifford did encounter hostility, lots of it, but he also did not quit, and as he neared 40 — an age when most golfers on the PGA Tour are winding down their careers — he broke pro golf’s racial barrier, becoming in 1960 the first Black player in a PGA Tour event.

It was a hard road to glory. Having turned pro in 1948, Sifford was relegated to the Black players’ tour and its meager purses as he competed well into his 30s. He won six Negro Opens, including five straight from 1952 through 1956. He first tried to qualify for a PGA Tour even in 1952 and endured threats on his well-being.

From 1934 to 1961, the Caucasian-only clause was a part of The PGA of America’s by-laws that prevented non-whites from membership and from competing on the PGA Tour.

In 1957, Sifford won the Long Beach Open, not an official Tour event, but the field included prominent, white PGA golfers. Still, he wasn’t allowed to compete in the Tour event the following week. Two years later he met Stanley Mosk, the California attorney general at the time. Mosk helped open the door. Knowing that Sifford was barred from PGA tournaments in his state, the prominent attorney presented Sifford as a California resident whose civil rights were being violated and asked the Tour to show reasons other than race why Sifford was denied membership. 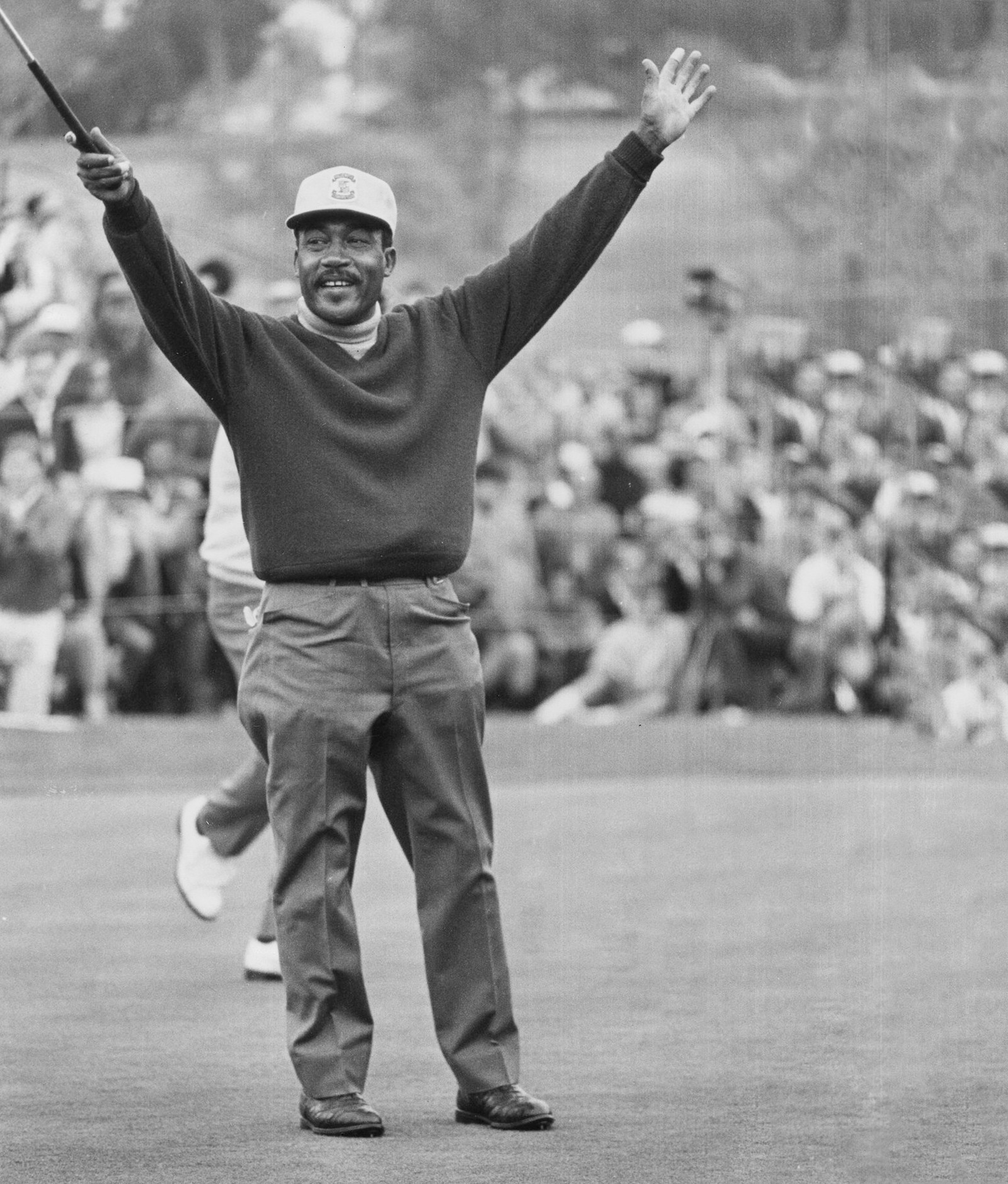 The PGA had no choice and in 1960 made Sifford an approved tournament player, the first Black to win the designation. Just a few months from turning 38, Sifford was officially a rookie on the PGA Tour. He didn’t have many good years left as a player. When Sifford was awarded full PGA membership, he was 42.

Breaking the color barrier in one of the nation’s most elitist sports, Sifford endured humiliation, threats to his life and limb, and even mistreatment from some of his fellow pros.

(Friends such as fellow professionals Bob Rosburg, Jackie Burke Jr., Don January and Bob Goalby would go through the buffet in a clubhouse dining room, then bring their food into the locker room to eat with Charlie). 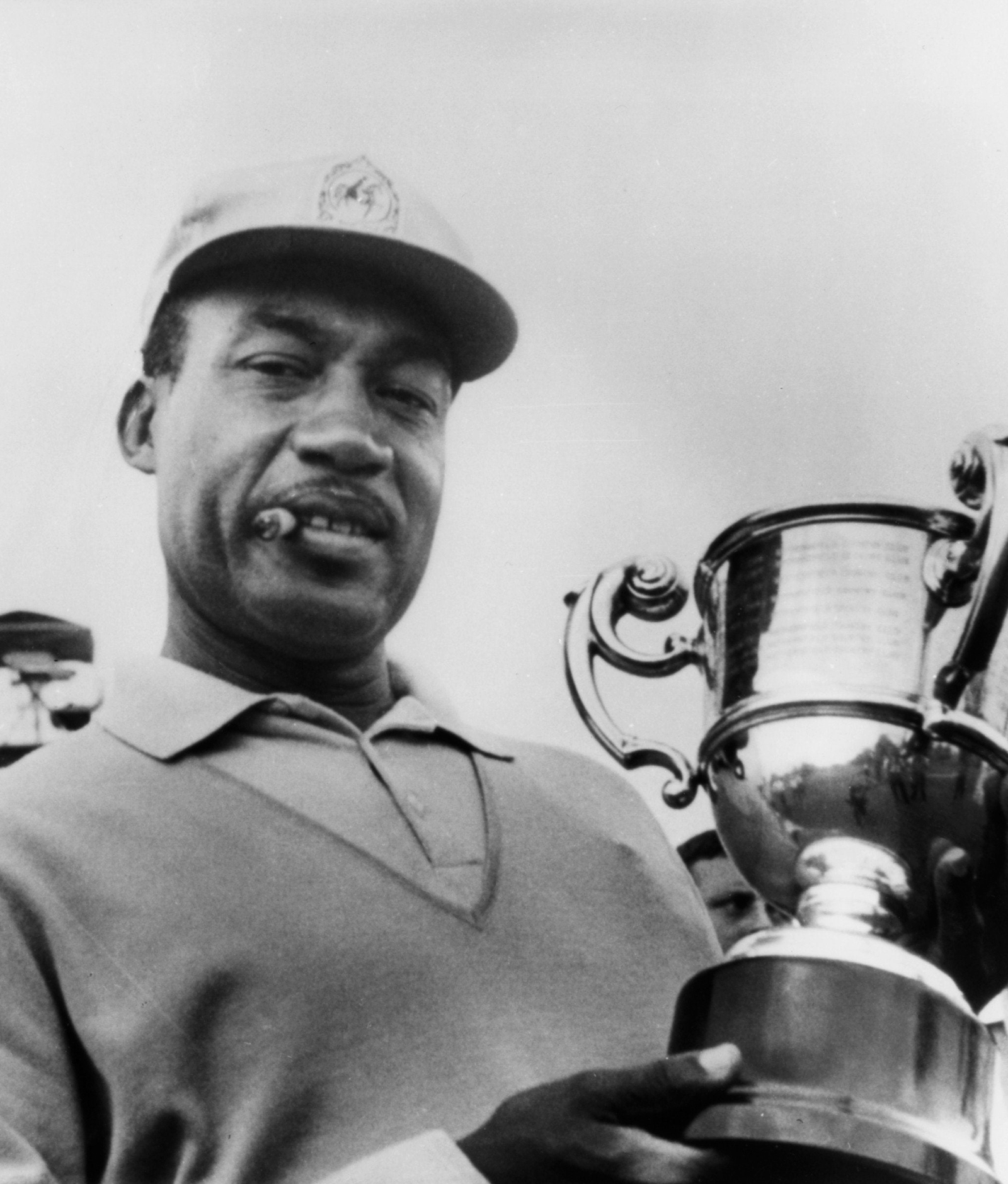 Nothing stopped him. Sifford endured injustice grimly and fought his battles essentially alone.

Relying on plenty of intestinal fortitude and smoking an ever-present cigar, Sifford, a quiet man, preferred to speak through his performance. He was angry, but he tried to let that frustration fuel his desire, winning PGA events in 1967 and 1969.

When Sifford won the high-profile Greater Hartford Open by one stroke in August 1967, shooting a final-round 64 at Wethersfield Country Club, he received an ovation from the galleries and pats on the back from his fellow pros. 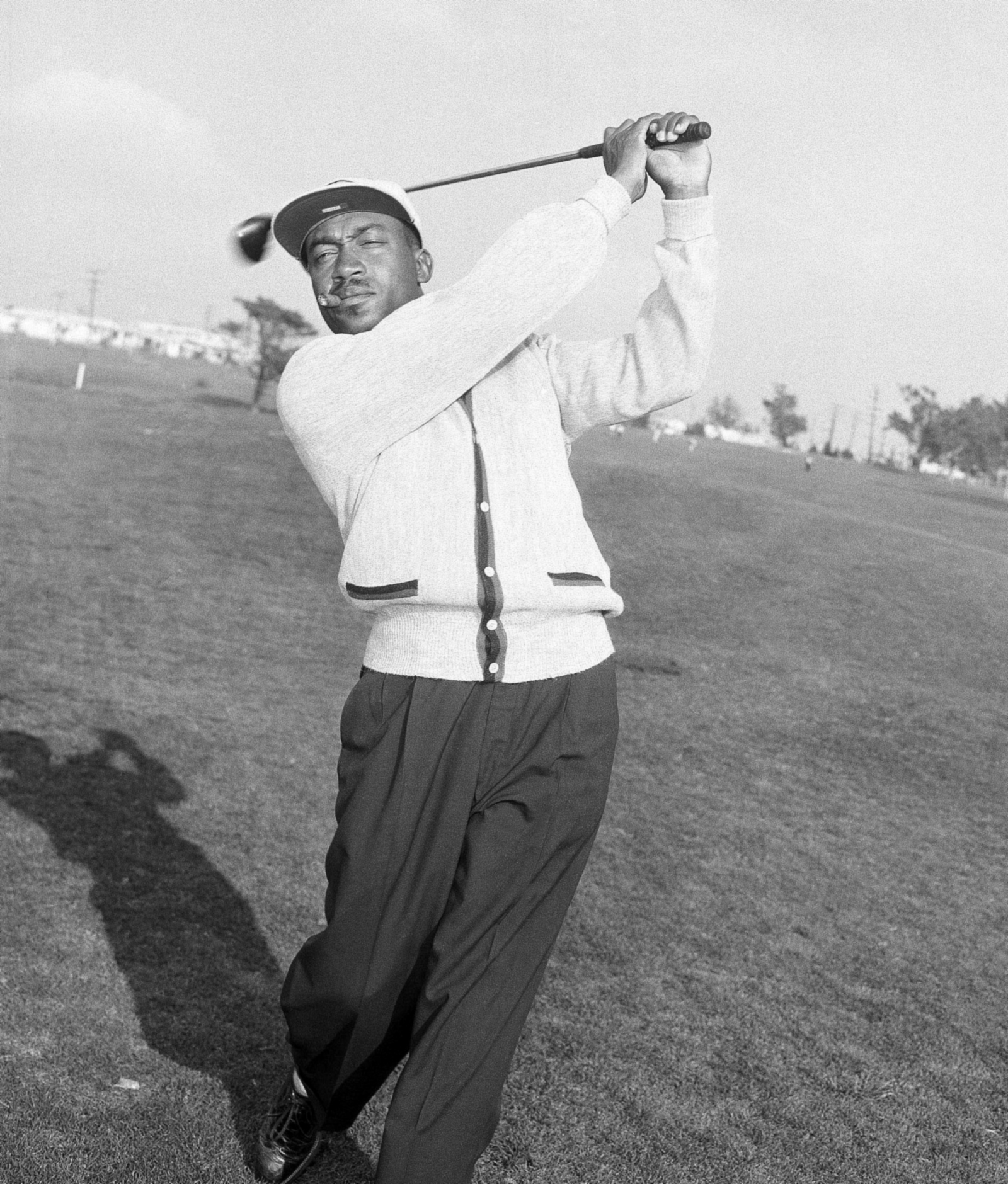 His triumph represented much more than his $20,000 paycheck. “If you try hard enough, anything can happen,” he said with tears in his eyes.

Just before winning the prestigious Los Angeles Open in 1969, Sifford was the focus of a story by legendary LA Times columnist Jim Murray who wrote:

“Golf was not a game for ghettos. Neither did it leave any time for carrying picket signs, joining demonstrations or running for office. Charlie birdied, not talked, his way through society prejudice. He broke barriers by breaking par. His weapon was a nine-iron, not a microphone.”

He managed to remain among the top 60 money winners for a whole decade, from 1960 until 1969 and went on to compete for many years, winning the 1975 PGA Seniors’ Championship and participating in the Liberty Mutual Legends of Golf tournament, where he won as recently as 2000. 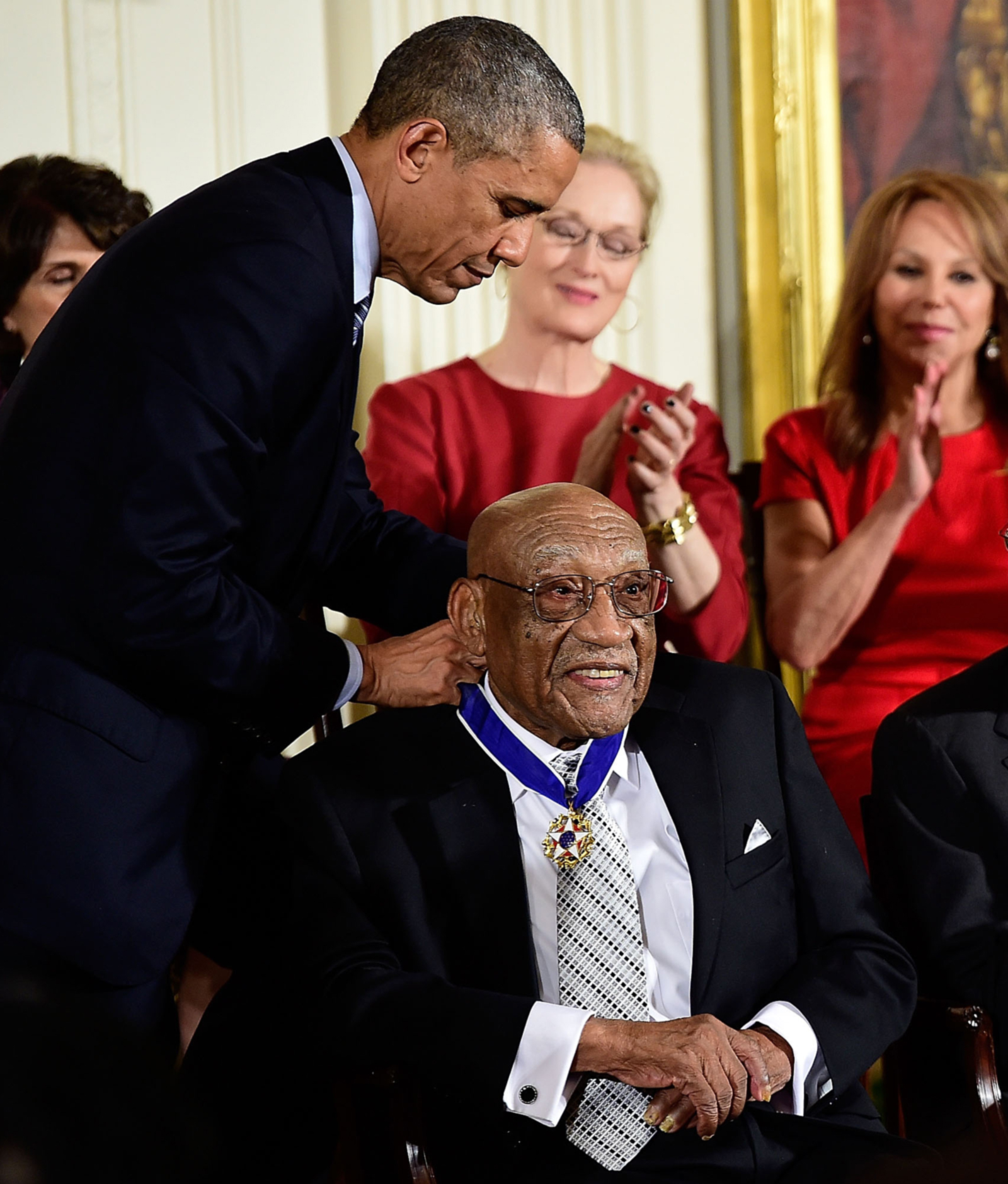 An original member of the Senior Tour (now the Champions Tour), which was founded in 1980, he won its Suntree Classic that year. He earned more than $341,000 on the regular tour and more than $1 million altogether as a professional.

“On the tour, Charlie was sometimes banned from clubhouse restaurants. Folks threatened him, shouted slurs from the gallery, kicked his ball into the rough. Charlie’s laughing about that — my ball is always in the rough.

“And because golf can be a solitary sport, Charlie didn’t have teammates to lean on. But he did have his lovely wife, Rose. And he had plenty of guts and grit and that trademark cigar. And Charlie won on the Tour twice, both after age 45. But it was never just about the wins. As Charlie says, ‘I wasn’t just trying to do this for me, I was trying to do it for the world.’ ”

He became only the third golfer to receive the award after Arnold Palmer in 2004 and Jack Nicklaus in 2005. 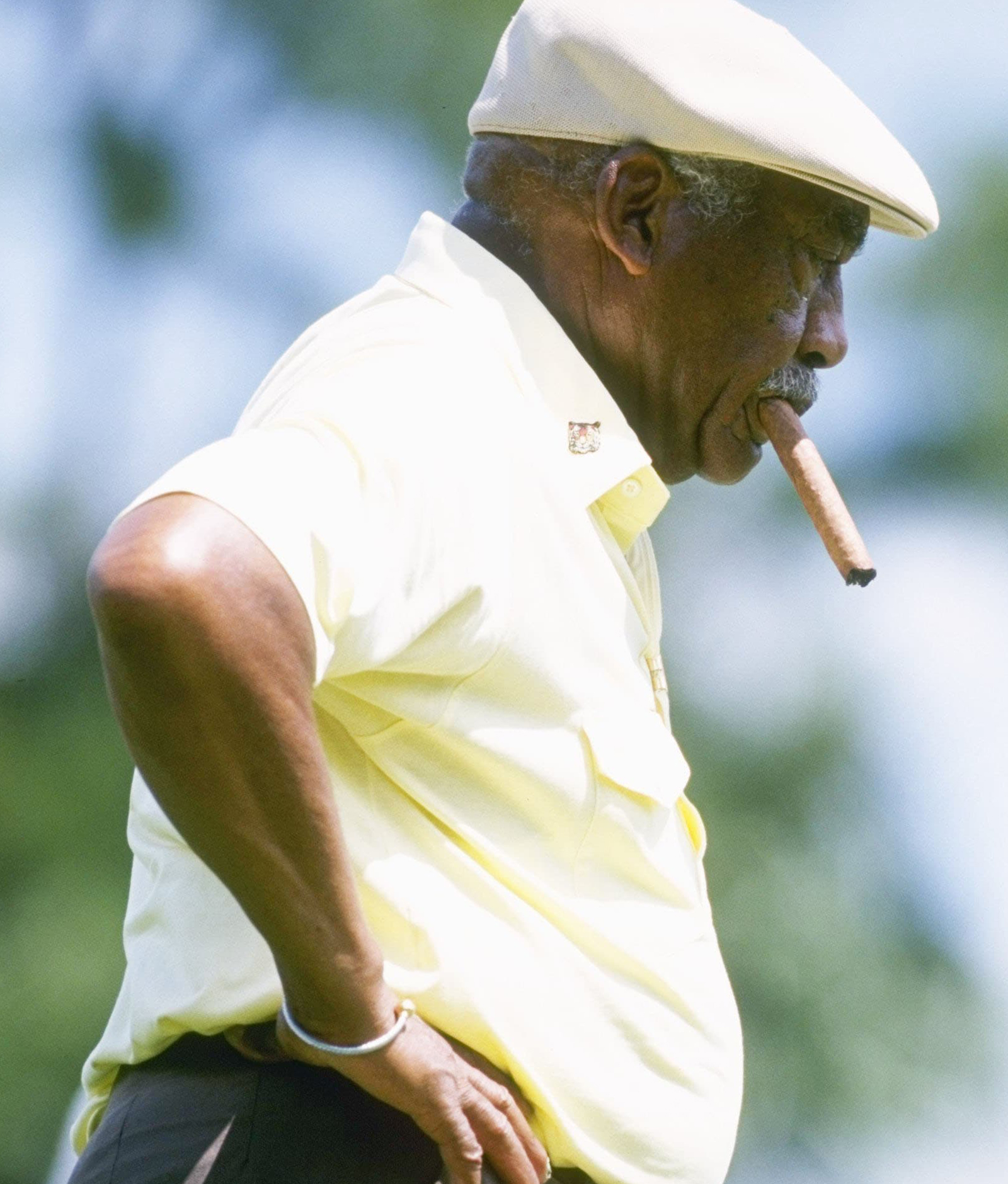 Ten years earlier, Sifford became the first Black golfer to break into another exclusive club. Even though there were 100 enshrinees to that point in the World Golf Hall of Fame, none was Black. Sifford was selected via the Lifetime Achievement category for his contributions to the game. “Tonight we honor a man not just for what he accomplished on the course, but for the course he chose in life,” observed Gary Player, who, having witnessed the injustices of apartheid in his native South Africa, proudly introduced his long-time friend at the induction ceremony in St. Augustine, Florida.

Looking back at how far he had come, Sifford had cause for joy.

“Didn’t anyone think I was going to get this far,” he said. “It’s like Nelson Mandela. They kept him in jail 25 years, but it didn’t break his determination. They couldn’t break mine.” 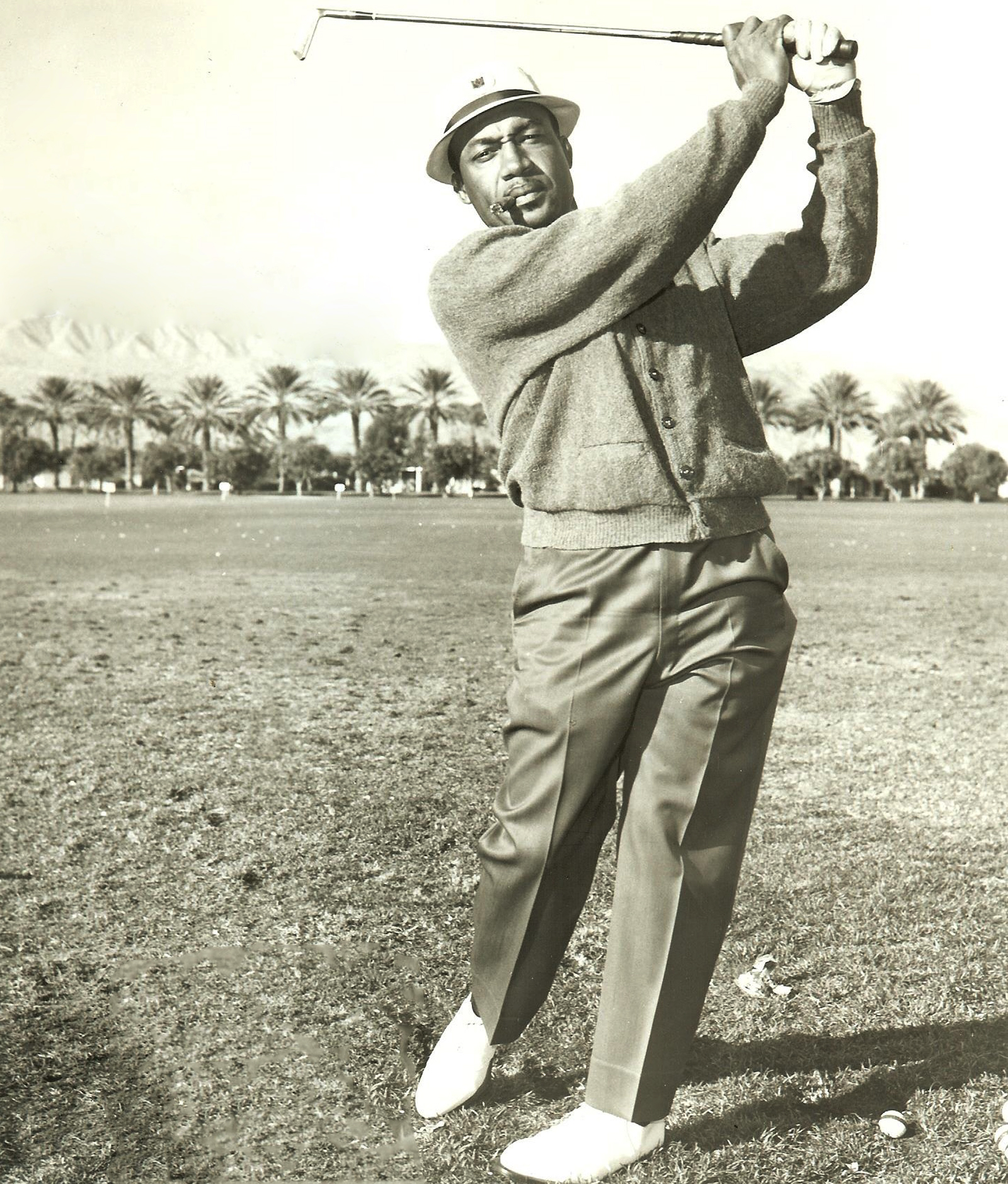 Though baseball has seen many more Black players on the major league diamonds through the decades than are out on the links, and even though much work remains to be done for the proper integration of golf, Charlie Sifford’s legacy remains historic as he was indeed the Jackie Robinson of his sport opening the door for minority golfers and underrepresented players from around the world.

Speaking to a newspaper reporter for the Lexington Herald-Leader, a humble yet proud Sifford said, “It’s not important, I guess, that I didn’t make it real big. It’s important that I made it. At least it did open the door for a few more Blacks.” 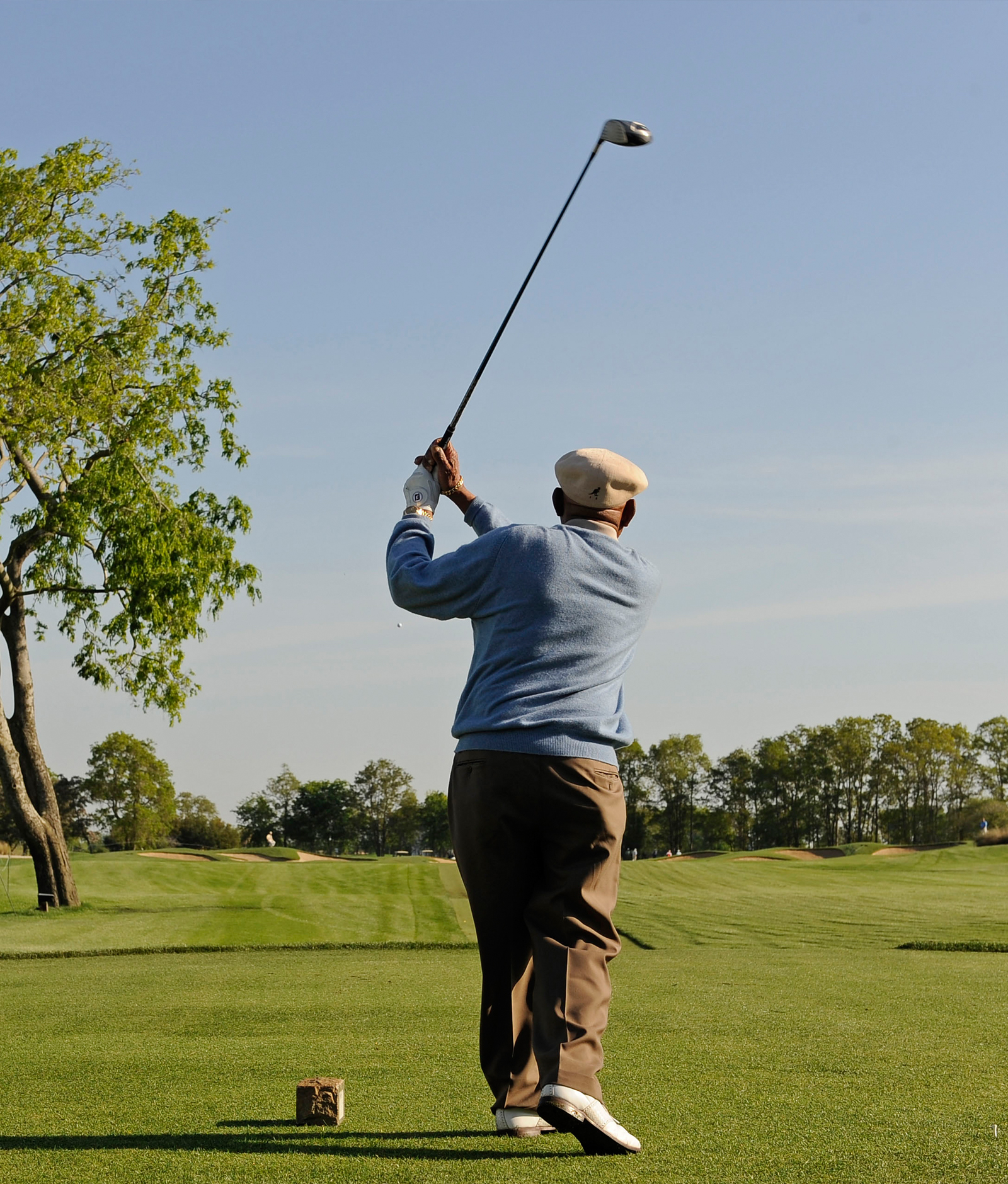 Tiger Woods had a close relationship with Sifford, speaking on many occasions how Charlie helped open doors for Woods to play golf as a youth.

“I’m incredibly proud to honor my hero Charlie Sifford through this exemption into the Genesis Open,” tournament host Tiger Woods said in 2017 when announcing the exemption would be re-named to honor Sifford. “His sacrifices as a pioneer for golf allowed me to play the game.”

A proud man who long-endured racial taunts and threats, Sifford set modest goals and achieved more than he had imagined.

Passing away on February 3rd 2015, Charles Luther Sifford, despite all the obstacles in a bittersweet career (because it didn’t really begin until he was 38, by then much of his prime had already passed), played through with dignity and distinction. 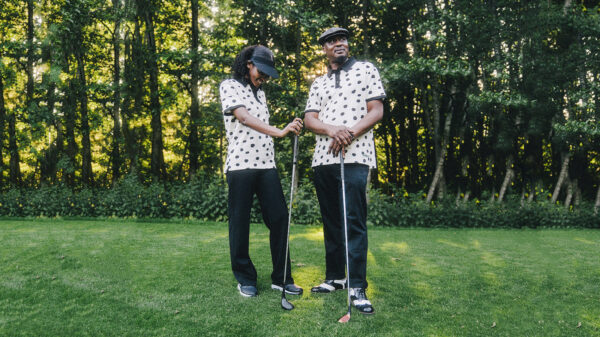